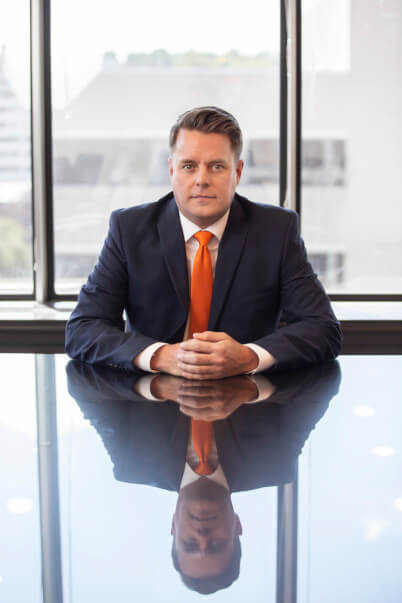 Larry Wright, the founding member of Criterion Law, LLC, dedicates his practice to representing injured people and their families. Larry has successfully represented many people who were injured due to motor vehicle accidents, medical malpractice, and slip and falls. Larry has also represented clients in wrongful death cases, dog bites, and in the US Vaccine Injury Compensation Program.

Larry, the youngest in a military family, grew up in Leeton, Missouri and graduated from Leeton High School in 1990. Following his high school graduation he began his studies at what was then known as Central Missouri State University. After a few semesters and being unsure what he wanted to do with his life he enlisted in and served in the US Air Force on active duty in 1993. After three and a half years on active duty Larry decided it was time to return to college and obtain his degree in political science and public relations. After being honorably discharged from the USAF he continued his service in the Air and Army Reserve from 1996 until 1999. After separating from the military, he attended UCM where, in 1998, he obtained degrees in Public Relations and Political Science. Following his undergraduate studies he interned for the then House Majority Floor Leader and began working at the Beenders Marketing Group.

After working in politics and government for a few years Larry decided to obtain his law degree. Larry began his legal education at the University of Missouri at Kansas City in 2000. He graduated and passed the Missouri Bar exam in 2003. He presently owns and operates Criterion Law, LLC located at 800 W. 47th Street, Suite 705, Kansas City, Missouri.

Larry Wright also served as an adjunct professor at the University of Missouri at Kansas City School of Law, he has published in numerous legal articles, has made many Continuing Legal Education presentations on various topics, and has been named Best of the Bar by the Kansas City Business Journal on numerous occasions.

Over the course of his career, Larry Wright has delivered invaluable assistance to clients facing complex legal matters. He understands that physical injuries often cause significant disruption to people’s lives and is committed to helping his clients navigate the challenging process of dealing with insurance companies and defense attorneys. Larry works diligently to help his clients receive fair compensation for their loss.